A word which is used instead of a noun perhaps because you have already talked about the person or thing, eg I, they, which.

A word which describes an action or a state of being, eg eat, like, know.

A word which describes or gives more information about a verb or an adjective, eg he walked quickly, she danced well.

A word which describes something or someone, eg beautiful, happy, long.

A word which is used with a noun or pronoun to show time, place or direction, eg at, on, in.

A word which connects words and phrases in a sentence, eg but, and, although.

A word which is used before a noun to show which particular example of the noun you are referring to, eg this pencil, your shoes.

An interjection is a word that is used to express emotion, eg Oh no! Gosh! Ow!

Learners need to know what type of word (noun, verb, adjective) they are learning so that they know how to put it into a sentence.

What idea the word shows and what contexts the word applies to.

Learners need to know how to say the word, how many syllables there are and which is stressed, eg ed-u-CA-tion.

Learners need to know how to write the word.

Learners need to know if the word has a positive or a negative sense to it. For example, the words ‘slim’ and ‘skinny’ both mean thin but one has a positive connotation (slim) and the other (skinny) doesn’t.

Learners need to know which words go with the word they are learning. For example, we make beds but do housework.

Learners need to know other words that are formed from the same word, for example, kind, unkind, kindness, kindly.

Learners need to know if the word should be used in formal or informal situations. For example, assist and help have the same meaning but assist is more formal then help.

Spoken language in which the words join to form a connected stream of sounds. In connected speech some sounds in words may be left out or some sounds may be pronounced in a weak way or some words might join together, eg Is he busy? /ɪzibɪzi/.

The smallest sound unit which can make a difference to meaning eg /p/ in pan, /b/ in ban. Phonemes have their own symbols (phonemic symbols), each of which represents one sound.

The characters we use which represent the different sounds or phonemes, eg /ɜː/, /tʃ/, /θ/. Words can be written in phonemic script (usually the International Phonetic Alphabet or IPA), eg /dɒktə/ = doctor.

Pronouncing part of a word (syllable) or part of a sentence louder and longer than other parts, eg VEGetable, I LOVE baNAnas. Some parts of words and sentences are stressed (those in capital letters in these examples) and some are unstressed.

Sentence stress is about the way some words in a sentence are stressed and some are unstressed. The stressed words are usually the information-carrying words or content words such as nouns, verbs, adjectives and adverbs. For example, It was a LOVely EVEning, and the TEMperature was PERfect (the parts of the words in capitals are stressed).

Word stress is about which syllable of a word is pronounced louder and longer – eg umBRELLa /ʌmˈbrelə/.

A poster or diagram of the phonemic symbols arranged in a particular order. Below is an example of the International Phonetic Alphabet or IPA. 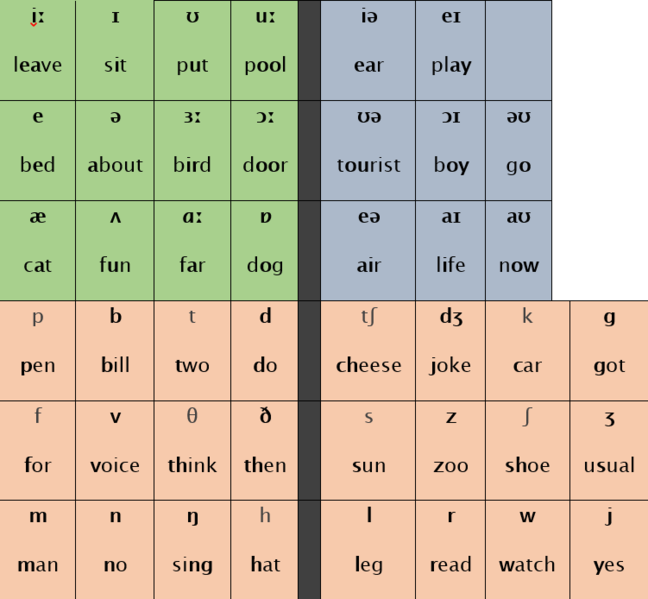